The First Toilets on TV! 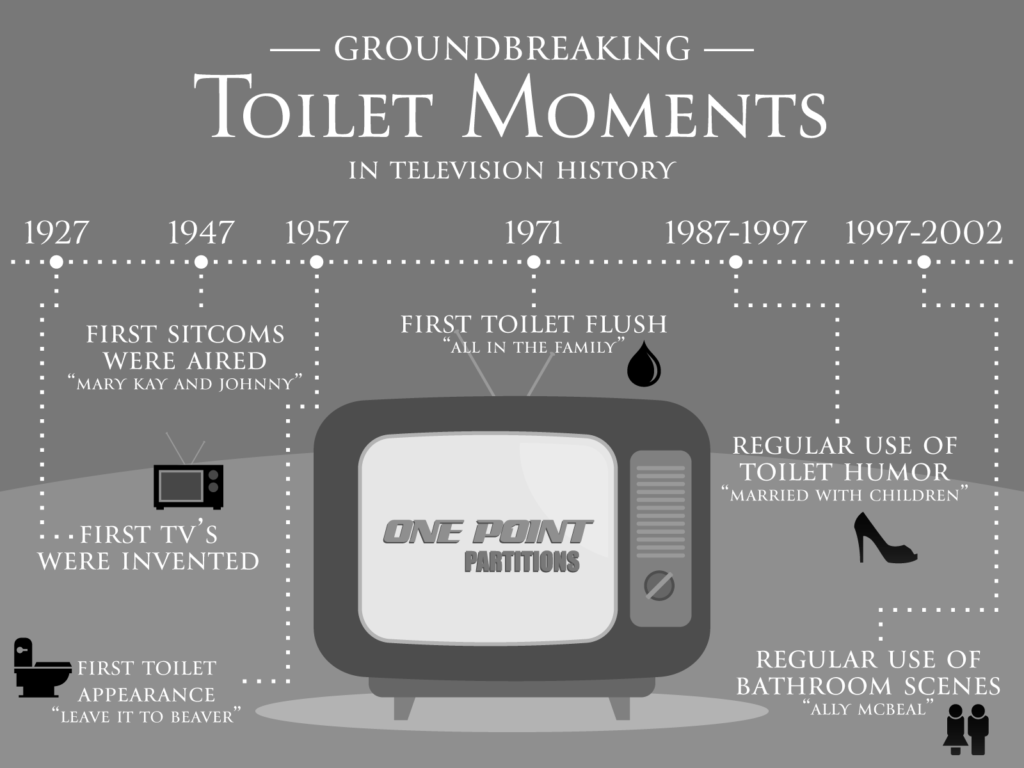 The first airplane flight. The first man on the moon. The first toilet on TV. Okay, so that last one may not be quite as significant as the others, but here at One Point Partitions, we find it quite interesting. As leading American experts in commercial bathroom partition design and manufacturing, we spend our days thinking about how to improve your bathrooms and deliver attractive, high-quality partition and stall products.

You might say that we have toilets on the brain! That’s why we got thinking about when references to toilets first showed up on TV. With a little research, we were able to dig up some early TV examples where we saw a toilet. This may not seem significant in our era of wild TV shows and toilet humor, but many years ago, the subject of toilets was completely taboo.

These pioneering shows weren’t afraid to make reference to one of the high-traffic rooms in your house: the bathroom!

This lighthearted show about an all-American family centered around the title character, Beaver and his daily adventures. One episode had Beaver and his brother trying to find a place to hide a pet alligator. They chose the top of the toilet tank (we don’t suggest this!).

The problem was, back in 1957, the TV networks refused to show a toilet on TV! It was considered in bad taste to make reference to a toilet. To fit the storyline, the compromise was to film the toilet tank but never show the bowl itself. It was a baby step towards the acceptance of toilets on TV!

The first time we heard a toilet flush on TV was during an episode of “All in the Family,” a groundbreaking sitcom from the 1970s. This show didn’t shy away from controversial topics, and while a flushing toilet seems laughable today, back then it was a relatively surprising and even shocking event.

In typical Archie Bunker fashion, the bathroom scene was turned into a joke, but it still wouldn’t be years before a flushing toilet on TV, or even regular use of the bathroom, would become a normal occurrence.

Believe it or not, “Married With Children” is one of the first shows to make regular reference to toilet and bathroom use. Those familiar with the show will know that low-brow humor and crude jokes were par for the course with this cult classic show, so it won’t come as a surprise that the toilet made it into more than one episode!

Other shows around this time may have occasionally made reference to the bathroom, but few actually focused on the toilet itself or included scenes and sounds with the toilet flushing.

By the end of the 1990s, reference to the toilet and bathrooms on TV was becoming relatively normal, but the quirky show “Ally McBeal” made the office bathroom a popular location for scenes in the show. It was also a unisex bathroom. The interactions between the male and female characters made for sometimes awkward, but always entertaining, comedy.

There was singing, dancing, fighting, crying and laughter, as well as a memorable scene with Ally stuck in the toilet. Few TV series have paid as much of an homage to the toilet as “Ally McBeal!”

Public and commercial toilets are a part of our day-to-day lives. That’s why our focus here at One Point Partitions is designing and manufacturing quality toilet stalls and partitions right here in America. Fill in our online contact form if you’d like more information and a free design and quotation for upgrading or replacing your commercial bathroom partitions.

Andy started One Point Partitions with his brother Jason Hughes. Andy has been here since 2006 and is always striving for easier better ways to provide partitions. Andy graduated from Iowa State University and has been in construction and product sales for much of his career. He spends his free time fishing and traveling....but mostly fishing. And fishing some more. Give him a shout today!

What's the lead-time for partition delivery?

Enter your zip code and find out!

find out prices
without the wait!